The first three books of the series in one! 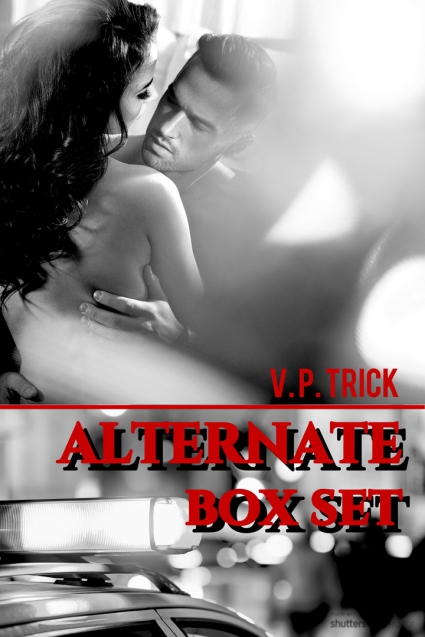 Securing a job as a filing clerk on her detective boyfriend’s investigation team was the easy part. So were his overprotective meddling, his attempt at getting her to quit or him firing her (as if you could, Big guy). Writing about dirty cops proved quite different than hunting a serial or two, though. What started as a casual love affair may be the end of her. Literally!

Dreamy female writers should spend their days at the library, or so Chris James MacLaren, Chief homicide detective, believed. Too bad his girlfriend had never read the memo. Now, he has to protect her as she traipsed around the city working on her cold case. Yah, even with just that one case, the woman could cause mayhem. He blamed the company she kept, her ex-hacker boyfriend–deceased, thank fuck–and his elusive agoraphobic sidekick, in particular. Chris has a plan, though. He intended to make her days too busy with filing to run off or recklessly research the hell out of her crazy ideas. As for her nights, they’ll be all his.

Christopher worried too much. That filing clerk job she secured on his team will prove a perfect research project. Observing the Big guy handle his was damn sexy, a little too much considering theirs was a casual relationship. Besides, she hated cops, and he was too tough and independent for anything serious, n’est-ce pas ?

After her stint as a filing clerk, Patricia moved up in a world. Now happily employed in a big corporation, her life could return to its normal of writing, drinking, walking, and avoiding her recently ex-boyfriend cop. Moving in together? So much for casual! Perhaps she missed the infuriating man, maybe her new boss was a jerk, but damn it, she was not giving up on her ordinary life!

Relationship hiatus aside, she didn’t have one worry whatsoever. Some lunatic kept sending her pen name cheesy love poems? Nobody knows my real name, Big guy. The gentleman stabbed in a mall toilet? Coincidental. The old geezer ran over on a country road? No link to her. And the dead man murdered at the rest area? Not. Tied. To. Her.

Admittedly, Chris’s plan had backfired. The damn woman thought their relationship was still casual. Worse, she acted as if they were off while he believed they needed to regroup and plan better. At least, he did. If he smoked and drank Scotch, that had nothing to do with the damn woman borrowing guns, ignoring threatening fan mail or leaving a trail of dead men as she traipsed around the countryside, right?

As Chief homicide detective, Chris had his hands full. The job was no picnic, but his team ran like a well-oiled machine. Well, except for the incompetents Central has dumped on him. Someone at Central was making him pay times four. Thank God Patricia had abandoned her filing clerk stint. Although, knowing her, the damn woman would have had ideas on how to get rid of them. Now she spent her days at the library, at least when she did not run off to Italy. Just when he thought his life couldn’t become more complicated, a prostitute accused one of his officers of sexual assault.

With Christopher busy helping his man out of trouble, Patricia intended to stay away from his precinct and soon look for another, more normal occupation. For now, she focused on her writing. Write, sleep, drink, hide were her therapy, as was her relationship with Christopher. They had made a deal. She stopped claiming their affair was only casual; he refrained from asking her to move in with him. What’s a woman to do when her cop lover gets arrested, though? Marry him–strictly as a get-out-of-jail card, Big guy–buy a house, and help the infuriating man clear his name.

For once, the extremes the damn woman took to support her friends were in Chris’s favour. Too bad he was too busy clearing the murder charges hanging over his head to enjoy her thoroughly.